ON THE SEA SHORE - SCENE FROM THE SCRIPT

The leaves on the trees are turning yellow. The tone of the

Dawn”. The art of this painter will set the visual tone of

Darkness falling. The place is calm. Park with a pond.

BEDŘICH SMETANA (59) stands close by the pond. He has a grey beard, vacant expression, mad eyes. There are pieces of cotton doused in brown ointment stuffed in his ears, the ointment runs down his neck. The wind blows between the trees and Smetana hums a few bars of a composition:

Smetana’s eyes are closed, then he opens them, lifts his

arms and begins to conduct an invisible orchestra between

the trees. The music continues until the final beat.

Smetana leaves and sees the composers LISZT, BERLIOZ and

MENDELSSOHN approaching him from the woods, applauding him.

I bring you special guests, my

Schuman, but today I bring two

other special guests, Berlioz and

Smetana bows before Berlioz and Mendelssohn, greets them,

even though he stands all alone between the trees.

Now we know why Bohemia has always

been called the conservatoire of

Gentlemen, let me invite you for

some tea, I live nearby, with my

daughter, if you please…

EXT, JABKENICE – IN FRONT OF THE LODGE, EVENING

Smetana approached a lodge, a large house with a sun-dial,

surrounded by a wooden fence.

The high E he had been hearing stops.

Smetana gestures towards his daughter’s door. A light shines

inside. Smetana beckons to his invisible guests.

He bows and reaches for the door knob.

Smetana walks into his lit room, towards his table.

Suddenly, he focuses entirely on his composition in

Sheets of music are scribbled over, scored through, blotted

with ink. Sheets are scattered on the piano, on the floor,

Smetana sits at the table, props up his head, scribbles and

writes over the score. His eyes are vacant.

Smetana rises, strides across the room and around the piano,

silent invisible orchestra. He mumbles along. He can hear

the orchestra in full swing.

B. SMETANA – VIOLA (THE SHIPWRECK)

ŽOFIE (30), his daughter, appears in the open door, a shawl

around her shoulders. She looks at Smetana with pity.

Smetana hasn’t seen her arrive, he continues to stride back

and forth across the room, stepping on the sheets of music

as he does so. Music can be heard – cacophonic, overlapping

Žofie steps away from the door and touches her father’s arm.

Smetana starts and turns to her, he tries to pull away but

Smetana looks into her face. Absolute silence. He can’t hear

the music, nor Žofie’s footsteps, nor the sounds of the

Focus on Žofie, neither Smetana nor the audience can hear

Smetana breathes heavily but he finally stops fighting his

daughter and even lets her place her hand upon his cheek.

Žofie smiles, touched, she leads her father firmly towards

the bed. She clears away the sheets of music and scribbles

Tomorrow is another day.

piano. She runs her fingers across the notes. She looks at

Smetana, who is asleep. She sits beside him, sees his eyes

half-closed, breathing. She takes out a piece of cotton from

his ear, leans down and whispers.

Smetana doesn’t even stir. Žofie hears a creak and turns to

the door, seeing her husband JOSEF SCHWARTZ (38), a robust

handsome man, a forester. He motions for her to come with

hm. Žofie turns to her father for one last time, tucks him

in and smooths his grey shaggy hair.

Then she douses the lamp.

Smetana opens his eyes and sees the prostitute standing at

the foot of his bed. Her smiling mouth is painted red, in

the darkness behind her are shadows of other prostitutes,

moving back and forth in a seductive dance.

J. OFFENBACH – ORPHEUS IN THE UNDERWORLD

Smetana tries to rise but the prostitute crawls over him,

The prostitute straddles him. Her face is white. Her dark hair falls heavily over her shoulders. Smetana looks around and sees his wife KATEŘINA sitting on the piano stool, looking on, reproach in her eyes. He seizes the prostitute by the waist and tries to push her off.

Kateřina looks on, shaking her head sadly. The prostitute starts laughing. The women in the background spin. Smetana blubbers and shouts. The music intesifies and then breaks into a cacaphony.

Žofie and Josef wake when they hear Smetana screaming. Josef

groans and turns to the wall, Žofie kicks off the blanket

Smetana tosses and turns in bed and screams, his eyes

tightly shut. Žofie rushes in, quickly puts the lamp on the

table and places her hands on his shoulders.

so she starts to shake him harder.

Smetana suddenly opens his eyes and looks into her face.

Again, there is silence. We can see Žofie’s lips moving,

speaking urgently but we can’t hear what she’s saying.

She slowly lets Smetana go when she sees he has calmed down.

She has come for

me…Kateřina…she has come for me…

What are you saying?

Smetana looks around in terror. He tries to rise, as if

trying to find a visitor in the room. Žofie pushes him back

Žofie places her hand on his cheek, speaks urgently, so that

her father can read her lips.

Smetana lies down but still stirs.

I’m here with you. Don’t be afraid.

Smetana closes his eyes in exhaustion. Žofie strokes his

beard and cheek, she’s trying to calm herself down, too.

Smetana is asleep, one hand hanging off the bed. Žofie

listens to the sound of his breathing and the wind outside.

Then she suddenly hears a creak and turns around in fear,

takes the lamp but doesn’t see anything or anyone. She rises

of the bed and follows the sounds.

Žofie is afraid. She stares motionlessly into her mother’s

eyes and her mother stares back at her from the portrait. 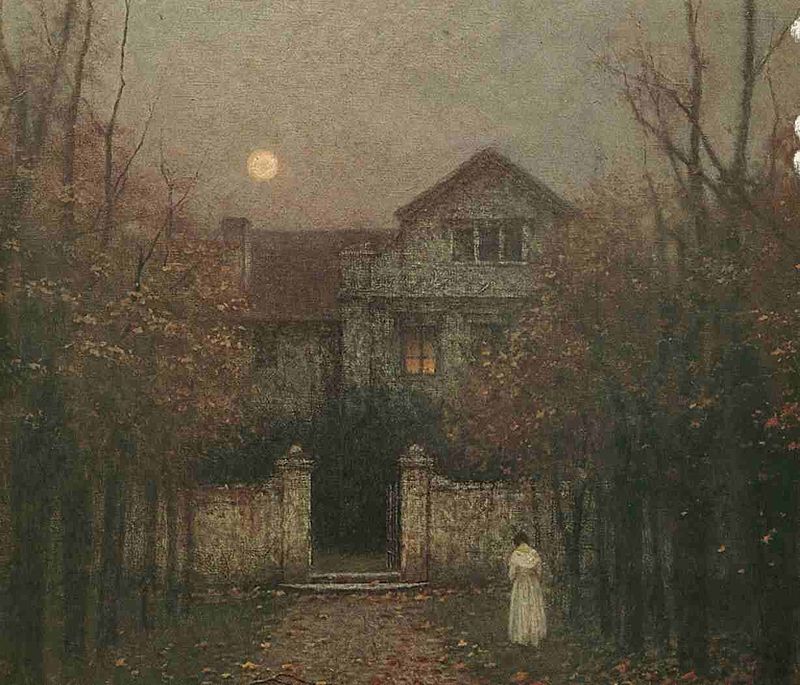 Happy Celluloid is a film and TV production company founded in 1993. In the audiovisual market it acts an independent producer of feature film and television series spanning many genres, producing fourteen features, five series and fortyeight episodes. It brings together film professionals and serves as an active partner of the Czech Film Fund and all Czech television broadcasters.